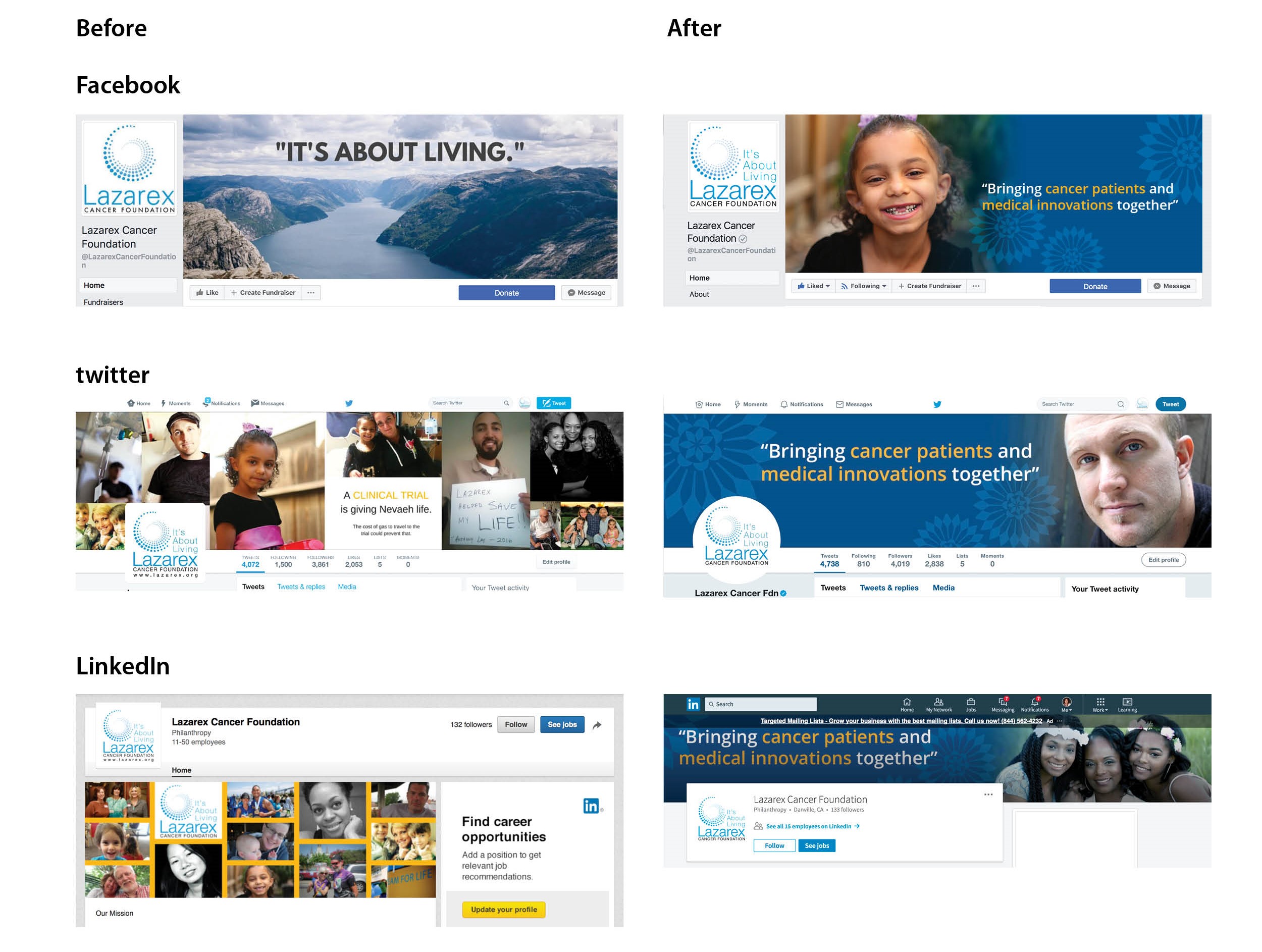 One of our clients, Lazarex Cancer Foundation, a nonprofit that improves patient access to cancer clinical trials, was having some success with their social media but wanted it to be a much stronger part of their marketing mix. Before working with the ThinkResults team, social media was a part-time focus for the communications director. It was among numerous other priorities on her daily list and she knew it wasn’t getting the attention it deserved.  Lazarex had a good following on Facebook (about 9,000 followers) and lots of high quality content for us to use.

Don’t have the time to read the entire post? Listen to the podcast version:

We knew that we could increase the performance of their social media program starting with the foundation they had built, then developing a more focused social media strategy optimized through detailed analysis of their web and social metrics.

After just three months of working with the ThinkResults team and implementing the new social media strategy, their social metrics began to skyrocket. Here are the results that we saw:

So how did we achieve that kind of triple-digit growth in just 90 days? Honestly, by focusing on the fundamentals. We figured out what kind of content was most engaging to people and when they typically engaged with the content. Then we set up a plan to deliver the content they wanted when they wanted it. It really is that simple. Implementation of course, is where the details live.

This re-prioritization of resources focused the creation of original content to the top channels, conserving resources and maximizing impact.

Our initial marketing audit revealed that Lazarex has a large collection of wonderful and emotional stories about their clients. We were able to leverage this content across social media to inspire and connect with readers.

Here is an example of a post of a patient story that performed very well on Facebook: 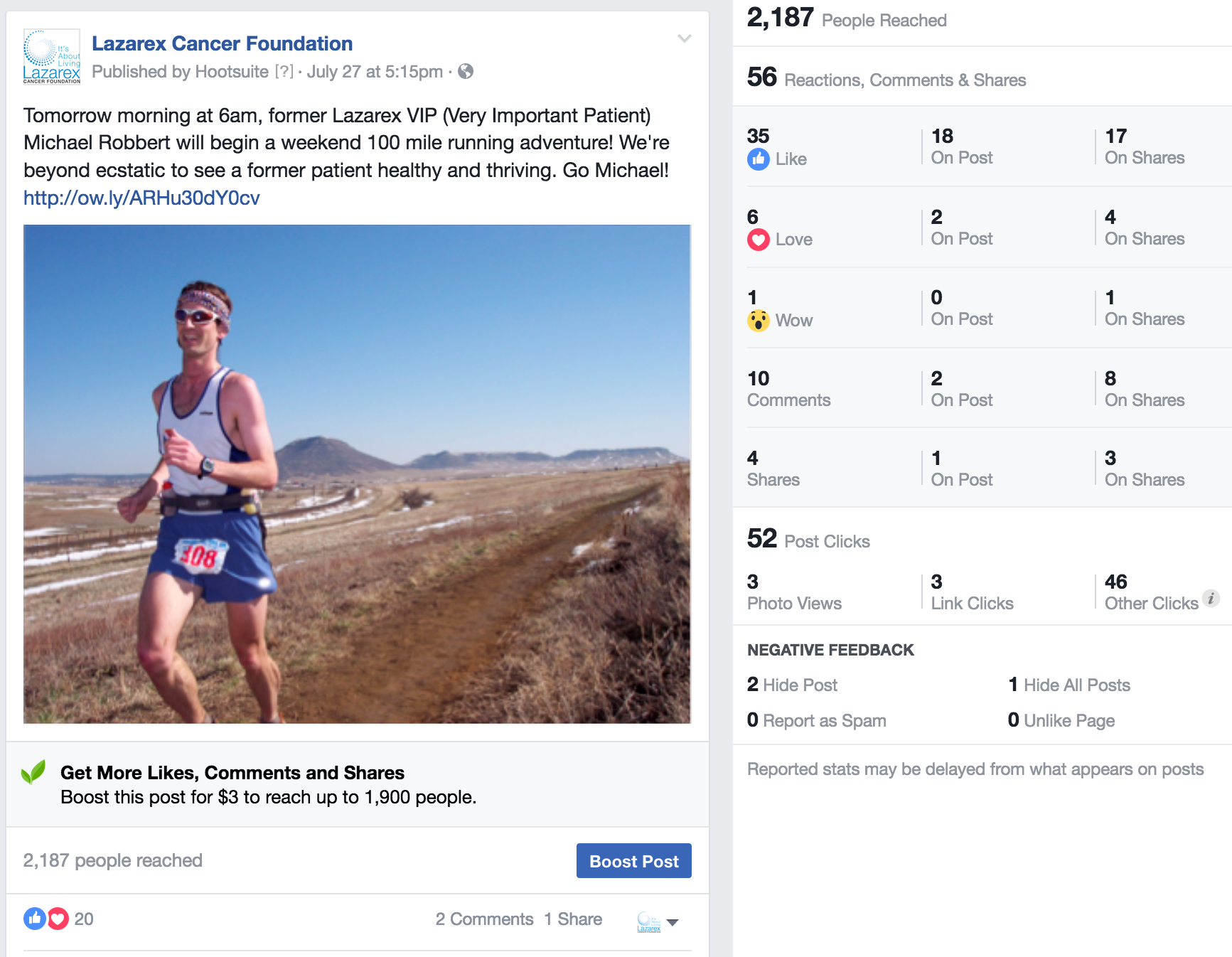 Michael was a former Lazarex Very Important Patient (VIP). He received support from Lazarex to attend a clinical trial that enabled him to have surgery to remove the cancer from his body and ultimately saved his life. Now he’s back to his love of ultramarathoning (races of 100 miles or more) and raising money for Lazarex as part of his efforts. Not surprisingly, people love this kind of content. It’s inspiring, it’s hopeful, it gives anyone touched by cancer (and who doesn’t know someone who has been touched by cancer?), hope that there is life after cancer, even after a Stage IV diagnosis in Michael’s case.

Ensuring visual consistency across the brand

In addition to examining the quality of content, we also looked at the state of the visual brand assets on displayed on social media. Our finding showed that although many of the images were beautiful and compelling, there was a wide variety of styles and limited consistency between the social pages and the Lazarex brand and website. Inconsistencies in brand image and messaging can lead to viewer confusion and unwanted noise. Here are the Facebook, Twitter, LinkedIn and YouTube visuals before the redesign:

To combat user confusion and brand inconsistencies, we redesigned the visuals for each of the pages. A strong visual that represents the diversity of the patients Lazarex supports was developed for each channel which was coupled with a focus on the consistency of the overall visual brand. Moving between the various social sites and the Lazarex homepage now feels visually and brand consistent and the primary brand message is reinforced in every channel’s masthead image. This leads to a smoother and less confusing user experience. These are the Facebook, Twitter, LinkedIn and YouTube visuals after the redesign: 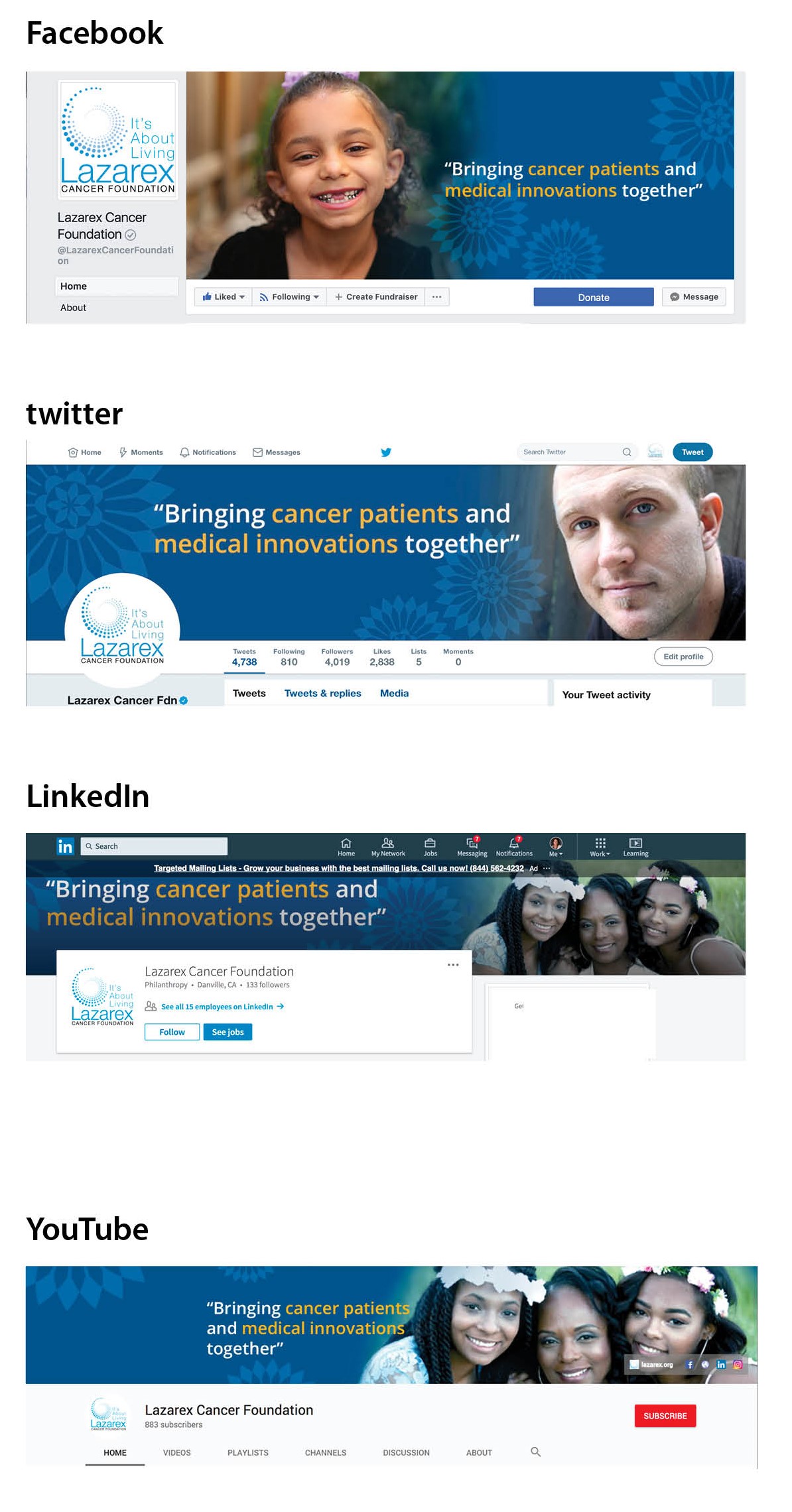 To ensure that all major topics were included in each week’s posts, we developed an extensive editorial calendar broken down into the following sections:

Once we had completed all of out prep work, we watched and waited. The Lazarex website statistics were tracked using Google Analytics to see how the redesigned social media program was influencing web traffic. We were excited to see that not only was there a significant increase in web traffic, the visitors routed from social media tended to stay on the site longer, had a lower bounce rate and interacted with more pages. Not only was the social media program driving more people to the website, they were more engaged visitors who are more likely to get involved and donate.

In addition to Google Analytics, we tracked both metrics of reach (impressions, followers) as well as metrics of engagement (likes, shares, retweets, etc.) using our social media management program (we use Hootsuite) and the native analytics tools from the social channels. We found that human interest and patient stories did very well, as did posts that linked Lazarex with big names such as Joe Biden (Lazarex is part of Joe Biden’s Moonshot program), and local news stories that feature the organization.

Knowing these metrics, we refined our editorial calendar accordingly. We focused on posting more content similar to those that were performing well and posted at times that the analysis showed people were most likely to be online. One pattern that surprised us was that visitors tended to interact more with the site during business hours than in the evenings or weekends.

By planning the content strategically, then measuring and refining according to the specific feedback from this audience, we combined known best practices in social media marketing with specific audience preferences to drive triple-digit performance for this organization. This is a strategy that can by applied to nearly any business and help to drive their social media program to great success.

Do you have a favorite social media strategy that has been very successful for your company? Please share in the comments.

How does your social media strategy compare?

Check out our free online quiz about the 10 Elements of a Successful Launch, including the social media element, to see where you fit and what you need to do next. Or simply set up a call,<mailto:jenn@thinkresultsmarkeiting.com> and we can talk about your situation and how to make your social media program work for you.

As CEO and founder of ThinkResults, Jenn works with CEOs, CMOs and change agents to drive results. For two decades, she has been launching companies and delivering leads and revenue growth for companies of all sizes including Microsoft, Intel, PeopleSoft, SAP, Taleo, Nektar Therapeutics and numerous life sciences and tech startups. To date, her work has delivered $1.5B in new revenue to clients. She is currently writing a book called “Launching for Revenue” about launching companies, products, services and people successfully.